What We’ve Learned About the Balance System From Astronauts

Recent research at Mass. Eye and Ear suggests balance testing may predict who could be better at controlling vehicle motion during spaceflight. Dr. Faisal Karmali explains what this means for pilots and non-pilots.

Our balance (vestibular) system has always been somewhat of a mystery. It’s a system that uses several parts of the body — think: brain, eyes, ears and muscles — to maintain the body’s equilibrium. It’s what keeps us from falling and allows us to see clearly while moving, among other things.

The balance system’s mystery lies in how exactly it works for individual people. Two people may experience identical sets of motion, yet their bodies react in two very different ways.

How an individual’s balance system functions matters. According to a 2016 study, the number of casualties caused by vestibular issues is estimated to be in the top five causes of death for some age groups.

“A properly functioning balance system makes us much better at performing everyday tasks such as walking,” said Faisal Karmali, PhD, co-director of the Jenks Vestibular Physiology Laboratory at Massachusetts Eye and Ear. “What we know and what our research confirms is that there are huge variations in vestibular function among subjects without any known vestibular disorders.”

The balance system and space

One way Dr. Karmali and his colleagues are studying balance is with astronauts. Since gravity in space is so different from Earth, there is a lot to be learned from travelers’ experiences.

New research led by Dr. Karmali suggests that vestibular function testing might be able to predict which astronauts or pilots will be better at controlling vehicle motion during flight.

The study discovered that good performance on a piloting task in the dark was associated with lower vestibular thresholds. This represents a stronger ability to perceive information about motion and spatial orientation. In other words, astronauts or pilots with higher vestibular thresholds are more likely to make piloting errors during flight.

“Even with all of the improvements in aviation safety, disorientation is still a cause of fatal accidents,” said Dr. Karmali. “This work emphasizes the important role for the balance system in flying planes and landing spacecrafts safely.” 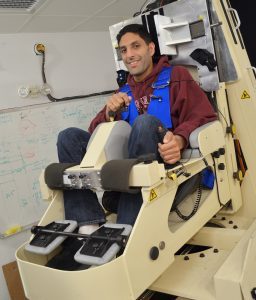 Key takeaways for pilots and non-pilots

For spaceflight, new knowledge on the role balance plays in flying may lead to additional studies to develop a screening test. The test would determine those who are more likely to have failure during landing based on vestibular function, which could then be used to make crew assignments.

For others, these findings are important for understanding the balance system. They reinforce another recent study that found that the same vestibular threshold measure predicted how likely a person is to pass a balance test in the dark and by age. This could help people understand which types of motion to avoid, or strategies to help them in motion.

“Just like in a hearing test when audiologists are looking for the quietest sounds that someone can hear, vestibular threshold testing looks for the smallest motion that someone can sense,” said Dr. Karmali.

Together, these studies highlight the importance of the balance system in everyday tasks, especially in reducing falls.

Dr. Karmali and his colleagues are now working to determine how important the balance system is when subjects have the same instruments that pilots use to orient themselves in the dark or in fog.

The hope is that this knowledge will inform the development of training and therapy programs — on the ground and in the air — to help reduce falls and errors in piloting.