A Cochlear Implant for the Nose

Proof-of-concept research may accelerate the development of smell restoration technology.

Estimated to occur in five percent of the population, anosmia is a phenomenon that reduces and/or eliminates a person’s ability to smell.

In some instances of smell loss, there is a treatable, underlying cause that’s easy to pin down, such as sinus disease. Treating the root of the problem typically restores the ability to smell. In other cases, however, anosmia is caused by damage to sensory nerves for which there are currently no proven therapies.

According to Eric Holbrook, MD, director of Rhinology at Massachusetts Eye and Ear, we attribute such cases to the nasal cavity (olfactory) nerves not functioning properly.

Olfactory nerves have the ability to regenerate on their own, but this doesn’t always happen.

“Similar to investigators attempting to regenerate hair cells to help those who cannot hear, we are searching for a means to restore the nerves of the nose to induce smell,” Dr. Holbrook said. “Just like regenerating hair cells, restoring the sense of smell in humans will take time.” 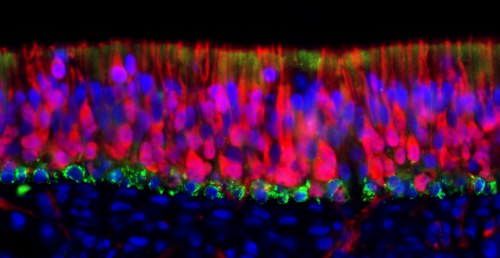 Microscopic view of layers of olfactory neurons (red) and one population of basal stem cells (green).

While investigators work on hair cell regeneration, patients with profound hearing loss do have the option of cochlear implants, which are surgically implanted devices that restore hearing.

Taking the cochlear implant as inspiration, Dr. Holbrook’s colleagues from the Virginia Commonwealth University (VCU) School of Medicine have been testing the idea of an olfactory implant system that uses electrodes to stimulate smell.

To determine if this technology is feasible, Dr. Holbrook became the first person to apply an artificial electrical stimulation of smell through the human nasal cavities and sinuses. In a recent study published in International Forum of Allergy & Rhinology, Dr. Holbrook describes that three of five patients reported sensations of smell as a result of the stimulation.

“Our work shows that smell restoration technology is an idea worth studying further,” Dr. Holbrook commented. “The development of cochlear implants, for example, didn’t really accelerate until someone placed an electrode in the cochlea of a patient and found that the patient heard a sound of some type.”

A proof of concept established

Now with established proof of concept, doors have opened for a ‘cochlear implant for the nose’ to be developed in parallel with the work on nerve regeneration. Dr. Holbrook and his team do caution that the concept of an olfactory stimulator is more challenging than existing technologies, however.

“There’s currently so little that we can do for patients with smell loss, and we hope to eventually be able to re-establish their sense of smell,” Dr. Holbrook said. “Now that we know that electrical impulses to the olfactory bulb can provide a sense of smell, that’s encouraging.”

Eric Holbrook, MD, specializes in complex sinus and endoscopic skull base surgery. He sees patients at the Mass. Eye and Ear Sinus Center, located at our main campus in Boston.

9 thoughts on “A Cochlear Implant for the Nose”