A New Tongue Built for a Life Well-lived

In the 1990s, Gail Rogers had her life derailed by oral cancer. A complex tongue reconstruction she underwent at Mass Eye and Ear not only put her life back on track but allowed her to live out some of her most precious memories.

In more than 30 years of practicing medicine, Mark A. Varvares, MD, FACS, Chief of Otolaryngology–Head and Neck Surgery at Mass Eye and Ear, has received countless letters from former patients. He keeps them in his office where, from time-to-time, he’ll re-read a ‘thank you’ etched in pen or flip through a Polaroid reel sent in by a patient months after their surgery. 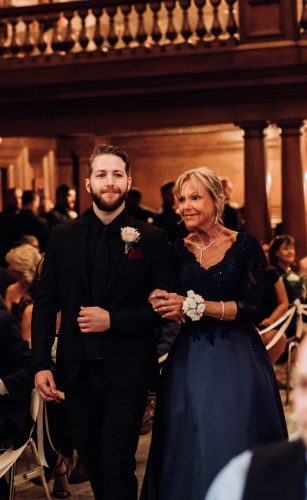 Gail and her son walking down the aisle at her daughter’s wedding.

But, without fail, it’s the wedding invitation from Gail Rogers, of Methuen, that catches his eye. The invitation is dated a year after the wedding and, inside its envelope, are several photos. One shows Gail helping her daughter into a wedding dress. Another of her husband walking their daughter down the aisle. The next: a family photo at the reception.

Together, they’re memories of a day Gail calls the best of her life.

“I had made so many bargains with God that I couldn’t actually believe I was watching my daughter walk down the aisle,” Gail told Focus. “To me, that day will always be a gift from Dr. Varvares.”

Gail had sent the letter, photos and invitation two decades after Dr. Varvares first treated her tongue cancer. Nevertheless, he remembers her case like it was yesterday: The cancer, caught in its early stages, needed to be removed, and a large part of the tongue reconstructed from her arm.

Gail’s cancer journey began 23 years ago when she woke up one morning to a deep pain in her right ear. It was a rude awakening accompanied by a nasty-looking canker sore in the middle of her tongue. When neither subsided, she visited her doctor, who found no ear infection yet recommended a dental surgeon take a closer look at the sore.

A visit to a surgeon felt odd, she recalled.

“Wasn’t this something I could take care of on my own at home?” Gail thought to herself. “Sure, it hurt, but it wasn’t anything more than a nuisance.”

When the canker sore persisted, she reluctantly visited a dental surgeon, who ordered a biopsy. In the subsequent weeks, Gail tried not to think about the sore. In fact, the biopsy had relieved some of the initial pain she felt on her tongue. Unfortunately, the test results would ruin any last peace of mind she had left: The canker sore was a squamous cell carcinoma, the most common form of tongue cancer.

“I remember going home, breaking down and crying,” said Gail. “I had three children, a husband working three jobs and, all of sudden, it felt like life was caving in on me.”

Gail’s doctors began to discuss her treatment options. While a combination of chemotherapy and radiation could kill the cancer cells, such treatment could last months with no guarantee of eliminating every last cell. Plus, according to further tests, the cancer was still at its early stages and had not spread far. Her best option, her doctors said, was to have the entire mid-section of the tongue removed and  replaced with a tissue graft. 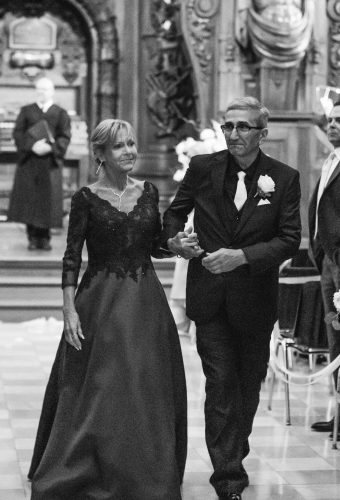 Gail Rogers and her husband at their daughter’s wedding.

In the 1990s, few surgeons in New England knew how to reconstruct a tongue using tissue from another part of the body. The technique – known as a free flap – was considered cutting-edge at the time for head and neck cancer operations. Gail did not know any surgeons trained in the technique in the North Shore, so she sought counsel from a chaplain she knew at Massachusetts General Hospital. The chaplain introduced her to Dr. Varvares, who had launched the head and neck free flap program at Mass Eye and Ear and was lauded for his bedside manner.

“I love being a surgeon because of the opportunity it gives me to connect with patients on so many different levels,” Dr. Varvares said. “By listening deeply to their priorities, respecting their wants and needs and treating them as we would want our family treated, we can build a trust that allows us to guide them through some very challenging waters.”

Gail knew Dr. Varvares was a perfect fit from the get-go. The two had a lot in common; both were doting parents of young girls and shared an unwavering love of hockey. Whenever they met for an appointment, Dr. Varvares always greeted Gail with a warm hug, a sincere smile and – as a die-hard St. Louis Blues fan – a lighthearted joke about the Boston Bruins.

“I have never felt as confident or comfortable in someone’s care as his, and likely never will,” Gail said.

Fortunately for Gail, Dr. Varvares was as results oriented as he was holistic and genuine. Taking into consideration Gail’s job as an assistant at a school library, he knew she would need a fully functional tongue to communicate. That meant he couldn’t use ordinary tissue to reconstruct the tongue. Tissue taken from Gail’s thigh, for example, would be too thick and firm, and could restrict her tongue movement, impeding her ability to speak and swallow.

Working closely with the medical oncology team at Massachusetts General Hospital and the speech-language pathology team at Mass Eye and Ear, he determined that tissue taken from Gail’s forearm was loose and flexible enough to serve the same function of the upper tongue. After, a 12-hour operation, Gail would not only wake to a new tongue, but a whole new appreciation for life.

A road to recovery ending with triumph

Gail’s recovery was not an easy one and, in the early months and years after her surgery, she felt like every new canker sore was a sign of the cancer returning. But Dr. Varvares was there to answer questions and keep her calm. Even when he left Mass Eye and Ear to join the St. Louis University Medical Center as its Department Chair in 2003, he made sure Gail had found a new head and neck specialist who could care for her in his absence. Then, upon his return to Mass Eye and Ear 12 years later, he agreed to take Gail back on as a patient.

“Days, months and even years after my surgery, Dr. Varvares kept me sane,” Gail said. “I’m forever grateful for the precious moments he’s allowed me to live since.”

Over time, Gail would learn to speak well enough to continue working as a library assistant. She wouldn’t stop there either; at the age of 50, she would pursue a career in teaching and become the first person in her family to earn a Master’s degree. However, both feats, she said, paled in comparison to living long enough to see her daughter walk down the aisle on her wedding day. And had it not been for the COVID-19 pandemic, it’s a day Gail swore she would have invited Dr. Varvares to. 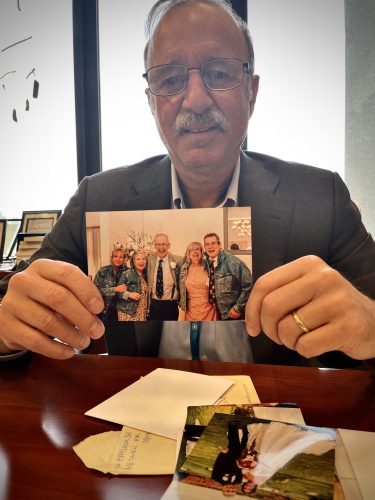 Mark Varvares, MD, holding a photo he received in the mail from his patient Gail Rogers.

Nonetheless, Dr. Varvares  cherishes the opportunity he had to help Gail and smiles whenever he looks through the year-old wedding invitation and photos. With each familiar face he sees, the photos feel more and more like a page out of his professional family photo album. There’s Thomas, Gail’s husband, who he remembered reading an entire Harry Potter book during his wife’s surgery. Then there’s Bud, Gail’s father, who Gail had told him captained the Northeastern Hockey Team in the first-ever Boston Beanpot Tournament.

Putting away the photos, Dr. Varvares can’t help but think of how much had changed in the time between Gail’s surgery and her daughter’s wedding. It’s the culmination of her successes that allow an ordinary letter in the mail to move his emotions.

“There’s a reason why I keep Gail’s letter, and countless others, right here in my office,” Dr. Varvares said. “They’re a reminder of why I come to work every morning; they’re why I love being a surgeon.”