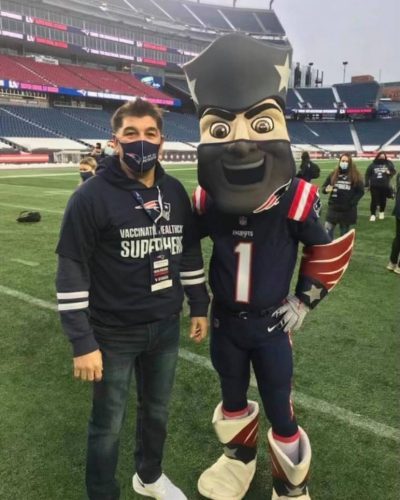 Falah on the field with Pat Patriot before Super Bowl LV.

One healthcare hero at Mass Eye and Ear got a super-sized surprise: an unexpected trip to the Super Bowl. Falah Krmang, a Public Safety Officer and interpreter who has worked on the frontlines throughout the pandemic, was presented with a ticket to the big game where he represented Mass Eye and Ear among a crowd of vaccinated healthcare workers.

His all-expenses paid trip was courtesy of the New England Patriots and its owners, the Kraft family. The Pats flew 76 healthcare workers across six New England states on their team plane to the Super Bowl in Tampa, Florida. Falah was surprised with the news, which was delivered by CarolAnn Williams, Senior Vice President of Administration, incident commander and chief financial officer at Mass Eye and Ear, and his supervisor Ryan T. Jordan, Director of Public Safety and Support Services.

“So many of our frontline workers have continued to support Mass Eye and Ear, our patients, employees and whole community throughout this pandemic. You’ve been on the front lines in multiple roles, protecting us as a public safety officer and assisting our patients as an interpreter,” said CarolAnn. “You represent the best of what Mass Eye and Ear is.”

“Super” Surprise for Health Care Heroes from Mass Eye and Ear on Vimeo.

Falah was left speechless by the surprise.

“It’s a great honor for me to represent all of Mass Eye and Ear’s frontline workers at the Super Bowl,” said Falah. He then turned to his supervisor and joked, “You’re not going to put me as absent, right?”

To honor those who have worked tirelessly throughout the pandemic, the New England Patriots flew the local healthcare heroes on the same team plane that helped deliver 1.2 million N95 masks from China to Massachusetts in April 2020. At that time, there was a nationwide shortage of personal protective equipment (PPE). 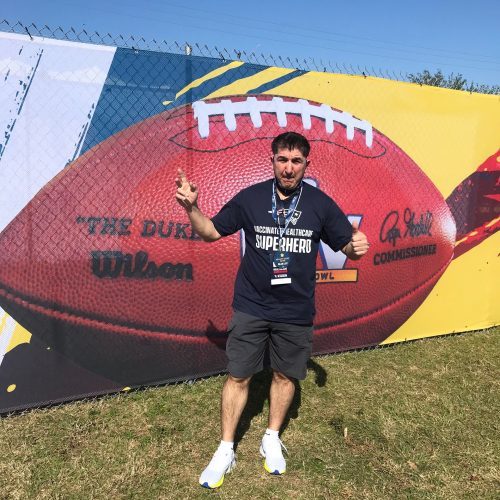 “We never could have imagined the devastation this pandemic would cause. We also never could have dreamed of the heroic stories and achievements that have come to be as a result, especially the dedication of healthcare workers on the front lines and the creation of safe and effective vaccines,” Patriots Chairman and CEO Robert Kraft said in a statement. “Ten months later, it’s an honor for us to celebrate these healthcare workers by giving them a well-deserved break for a day and an opportunity to enjoy the Super Bowl, a reality that is only made possible because of the vaccines. We hope that in doing so, others are also encouraged to get vaccinated as they are able. Once again, we want to say thank you from the bottom of our hearts to all of the healthcare heroes who have risked their well-being to ensure ours. They are truly superheroes to us.”

This year’s game allowed 22,000 fans, including 7,500 healthcare workers, to attend. Everyone was required to follow CDC guidelines for wearing masks in the stadium. The employees who were present were all received two doses of the COVID-19 vaccine, with the final dose completed at least two weeks prior to the game.

An unforgettable trip of a lifetime 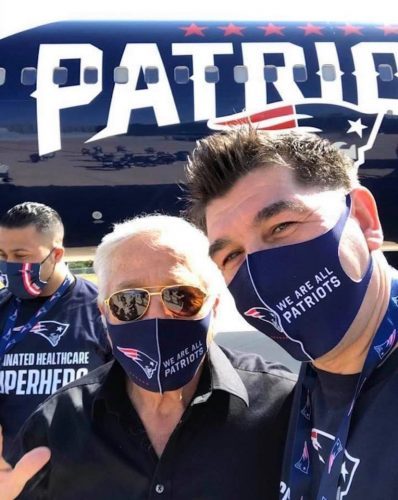 Falah and his New England healthcare colleagues met the morning of Super Bowl Sunday at Gillette Stadium. They made their way to Logan International Airport where they were sent off by Patriots team president Jonathan Kraft and Massachusetts Governor Charlie Baker.

The Patriots plane, which is emblazoned with a decal that reads: “When It’s Your Turn, Take the Shot. Get Vaccinated.” carried the healthcare workers to Tampa International Airport where they were greeted by team owner Robert Kraft. Falah was fortunate to take a picture with him.

Before the game, all of the healthcare workers were able to go on the field, where hours later the NFL’s stars would play in the biggest game of the year. They were then treated to the NFL TikTok Tailgate concert headlined by Miley Cyrus.

As for the game itself, Falah said it was thrilling to watch former Patriots star Tom Brady win his seventh Super Bowl. After the game, Falah and the local healthcare workers got back on the Patriots plane, and arrived in Boston early the next morning.

“Thank you to the New England Patriots for their generosity and this amazing honor,” said Falah. “The game was incredible of course, but the people and the atmosphere was what really made the trip such a wonderful experience. I will never forget this once-in-a-lifetime trip with my fellow healthcare colleagues.”