After Benjamin Peikin came to Mass. Eye and Ear for treatment for recurrent respiratory papillomatosis and was able to gain his speaking voice, his family decided to give back. They shared their story at the 10th Annual Sense-ation! Gala.

The human papilloma virus (HPV) hadn’t been on the radar of Benjamin Peikin’s family until he was 2 years old. At that time, they noticed their son’s speech wasn’t developing normally and sometimes he had trouble breathing during physical activity.

The Miami-based family sought answers without much success until Benjamin’s father, Mark, had an idea to fly back to the state where he grew up.  He remembered that Massachusetts Eye and Ear had been known for being one of the top places for treating conditions of the ear, nose and throat.

They met with Christopher J. Hartnick, MD, director of the Pediatric Airway, Voice and Swallowing Center, and chief of Pediatric Otolaryngology at Mass. Eye and Ear, who identified the issue. Dr. Hartnick determined that the HPV virus, which has received significant attention for causing cancer later in life, was the reason for Benjamin’s airway challenges. Many families, including the Peikins, were unaware it might also affect children.

Benjamin’s Story from Mass. Eye and Ear on Vimeo.

Benjamin’s breathing passages were being blocked by recurrent respiratory papillomatosis, a disease caused by the HPV virus that leads to non-cancerous tumors, called papillomas. Papillomas can grow on the larynx (or voice box) where they can affect speech and cause a blockage in the airway. Once removed, the tumors tend to grow back quickly, and currently, there is no cure.

“We had no idea that either of us may have been exposed to HPV,” said Mark.

Dr. Hartnick’s treatment required Benjamin to come into the operating room every three to fourth months so Dr. Hartnick and his team could surgically clear the tumors from Benjamin’s vocal cords to help his breathing and speech. Voice-sparing lasers cut off the blood supply to the tumors to not destroy the tissue underneath, Dr. Hartnick explained. “Without this treatment, he might have needed a tracheotomy breathing tube,” he said.

Now 7 years old, Benjamin is doing better than ever. The procedures have been so successful that treatments will not be required as frequently, with as much as one year in between visits.

“Benjamin’s able to live his life, go to school, be with his friends and make himself understood,” said Dr. Hartnick.

Mark jokes that once Benjamin found his voice, he would talk to as many classmates as he could – unfortunately even when the teacher was speaking.

“It was an interesting parent-teacher conference because we were overjoyed this situation was going on,” Mark laughed. 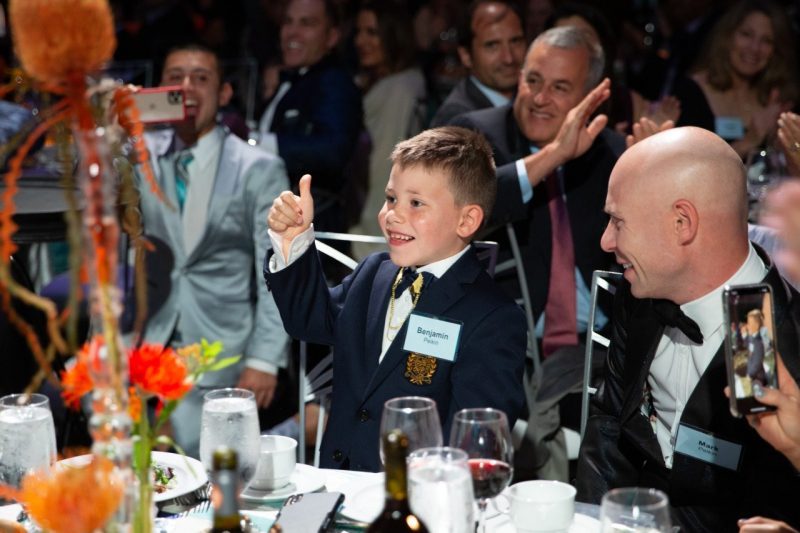 HPVs tie to the head and neck

Specialists fear the stigma around HPV may prevent people from being aware about the risks and make them less likely to get their children vaccinated against the virus. For some, the virus will clear on its own and cause no harm, but for others, it may become more serious, or become cancerous.

“HPV is a chronic sexually transmitted disease. Unfortunately for many, especially parents, there’s a tremendous amount of guilt and shame associated with this disease,” said Kevin Callans, RN, nurse case manager for the Pediatric Ear, Nose and Throat Program at Mass. Eye and Ear. “Even though, the majority of the population has had the HPV virus at some point.”

HPV is now the most common cause of oropharyngeal cancer in the United States, according to the Centers for Disease Control and Prevention, accounting for approximately 70 percent of all cases.

HPV-driven diseases of the head and neck are an ongoing research focus at Mass. Eye and Ear. Dr. Hartnick’s team is researching why a child like Benjamin got papilloma growths while others whose parents had the virus did not. The team is also working on researching and testing new laser technology that may spare the voice and tissue even more.

Grateful for their care, the Peikin family donated $2 Million to Dr. Hartnick’s program to spur research and help others with his condition. They recently shared their family’s story at the Mass. Eye and Ear 10th Annual Sense-ation! Gala, where Benjamin thanked the crowd for their support.

“This is a public health problem on a large dimension that we don’t want to shun and taboo,” said Dr. Hartnick. “We want to embrace it and look for a cure.”

The head and neck cancer specialists at Mass. Eye and Ear recommend anyone ages 11 to 21 (up to 26 for females), receive the HPV vaccine. Ideally, people should be vaccinated before potential exposure to the virus. For those who have already been infected with one or more HPV types, they can still get protection from other strains with the vaccine.

Find more information on our Pediatric Ear, Nose and Throat Program, or call 617-573-3190 to make an appointment.