A graduate of the Employment Now Initiative, formerly Project SEARCH, a professional job and life skills program for visually impaired adults, shares her experience and how it led her to becoming a research assistant at Mass Eye and Ear. 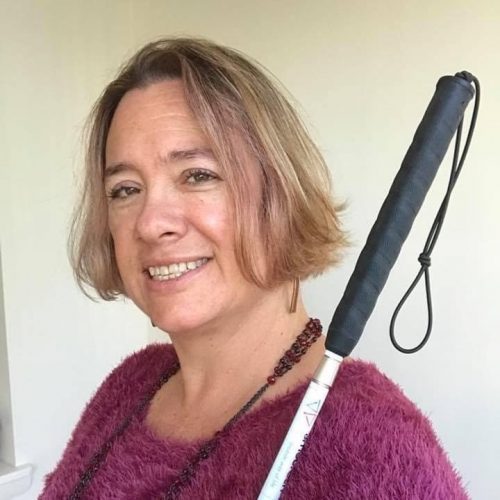 Sheryl Erwin Smith, a research assistant at Mass Eye and Ear, is no stranger to the hospital. Sheryl has myopic macular degeneration, and has been a patient of Mass Eye and Ear for years including visits with contact lens specialists for retinal changes, multiple surgeries and appointments with a team of low vision specialists.

Sheryl described to Focus that her condition causes her central vision to be much worse than her peripheral vision. She was 27-years-old when she first began to notice a change in her vision.

“Most people see a straight line, mine is curvy,” she said. “The curvy line was an indicator that something was wrong.” After having surgery to cauterize the blood vessels behind her eye, her vision stabilized for more than 10 years.

Then in 2014, Sheryl noticed something new was wrong. After living with myopic macular degeneration in her right eye, her doctors diagnosed it in her left eye as well. It was a personally tough time for Sheryl – she had lost her vision and was laid off from her job of 25 years as a pharmaceutical researcher. At that point, she decided to make the move from New Hampshire to Massachusetts to be closer to family, and she was hopeful about her medical options in Boston. That’s when she met retinal specialist John Miller, MD and the rest of the clinicians who would become her treatment team at Mass Eye and Ear. She said that afterwards her life began to drastically change for the better.

Setting sights on a career path

In 2017, Sheryl was diagnosed as legally blind. “I knew that I was losing more of my vision, but I wanted to know how I could still hold a job,” she told Focus.

Despite having three degrees – two bachelor’s degrees in public relations/mass communication and animal science and a master’s in technical communication – she was uncertain about her job prospects.

Sheryl was referred to an information session at the Carroll Center for the Blind, where she first learned about the Mass Commission for the Blind (MCB). “It was so exciting because I knew I could finally get the services I needed,” she said. That year, Sheryl worked with specialists at MCB, including rehabilitation and mobility counselors. She learned about smartphone apps, like low vision tools and magnifiers, that became great resources for her.

Around the same time, Sheryl was elated when a spot opened up for her at the Carroll Center in their 12-week intensive Independent Living Program. Residents are offered a variety of courses and activities like fencing, cooking classes, technology skill-building and braille lessons. After having cataract surgery at Mass Eye and Ear, Sheryl opted to take an additional six-week Computing for Employment course at the Carroll Center.

Following the course, Sheryl was referred for eyelid surgery due to stretching caused by wearing hard contacts for most of her early life. “After the cataract and oculoplastic surgery at Mass Eye and Ear, my field of vision opened up a whole new world for me.”

From Mass Eye and Ear patient to colleague

Sheryl was offered a position to work at the Carroll Center with their youth program as a Daily Living Instructor. She recalled, “It was such a fun experience to be a mentor for them, the kids were amazing!” This experience led her to the internship program at Mass Eye and Ear called the Employment Now Initiative. Previously known as Project SEARCH, it is a professional job and life skills program for visually impaired adults that provides internship opportunities to those who are often barred traditional entry to work. Sheryl met with the program leaders and felt what she called an “instant camaraderie.” “I was excited because the Employment Now Initiative has a phenomenal success rate for employment after graduation,” she said.

Sheryl worked as an intern for a couple of months in the Radiology department and towards the end a permanent position opened up in the Vision Rehabilitation Lab at the Schepens Eye Research Institute of Mass Eye and Ear. 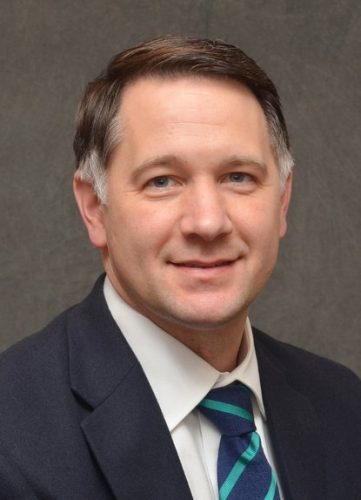 Sheryl’s supervisor shared the opening with her: a position in a lab led by vision rehabilitation specialist Kevin Houston, OD. Before she knew it, Sheryl was meeting with the Employment Now Initiative leaders, and a few hours later interviewed with Dr. Houston. By the end of the day, they had offered her the position.

“We were so thrilled to welcome Sheryl to our team. Not only was she incredibly qualified with her research background, but her experience as a Mass Eye and Ear vision rehabilitation patient provides a unique perspective that will benefit all the people we are trying to help through our research,” said Dr. Houston.

Sheryl’s position is funded by a grant awarded from the National Institutes of Health’s Diversity Initiative. The grant aims to enhance the research workforce by recruiting and providing mentorship for under-represented groups in health-related research, including those with visual impairment. The grant is a supplement to the ongoing NIH research grant (5R01EY029437-04) awarded to Dr. Houston and his collaborator, Eleftherios Paschalis Ilios, PhD, funding the study of this new device.

In Dr. Houston’s lab, Sheryl is working with the team on developing a first-of-its-kind pair of eyeglasses that will help patients with ptosis, or droopy eyelids. They are planning to launch a clinical trial soon for these eyeglasses that contain magnets, which might help patients improve their condition and vision.

“Sheryl is a phenomenal example of the success of Employment Now Initiative and persevering through challenges,” said Sharon Whittaker, senior director of Human Resources at Mass Eye and Ear and Mass General Brigham. “We are grateful to have her as part of the Mass Eye and Ear team and look forward to following her success!” 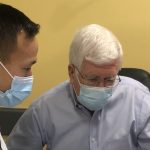 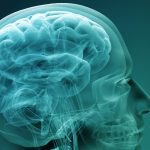 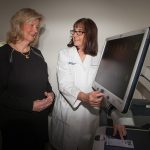 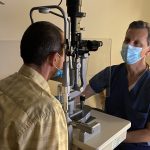