A Mass. Eye and Ear patient credits the Voice and Speech Lab and Thyroid and Parathyroid Division for giving him his voice back (and keeping it)! Now, he has a new zest for life.

Joseph (Joe) O’Keefe was going about his life in Pennsylvania when he started experiencing throat problems. He wasn’t in any pain, but one day he completely lost his voice. He describes the months without his voice to be almost like a constant bad cold.

A number of tests were conducted at a local hospital, all of which came back fine, showing no obstructions or vocal cord issues. Simultaneously, but completely unrelated, a cyst was discovered on the left side of Joe’s thyroid. It grew from the size of pea to an egg in less than 18 months.

Joe was referred to a neurologist who diagnosed him with amyotrophic lateral sclerosis (ALS). “That diagnosis didn’t sit right with me, so I decided to get a second opinion,” he said. This led Joe to make an appointment with James Berry, MD, a neurologist at Massachusetts General Hospital.

Dr. Berry did a series of tests for ALS, all of which concluded that Joe’s diagnosis was incorrect. He referred Joe to Glenn Bunting, MS, CCC-SLP, clinical director of the Voice and Speech Laboratory at Massachusetts Eye and Ear, for voice therapy. Glenn performed tests as well, manipulating his neck and having Joe read out loud.

Three hours later, Joe had his voice back.

“All of the muscles in Joe’s neck were so constricted and tight that they were causing him to lose his voice,” said Glenn. “After two voice therapy sessions, Joe had complete return of normal voice.”

“All of the people who took care of me are remarkable,” noted Joe. “They really went out of their way to accommodate us and get us in to see the right people.” 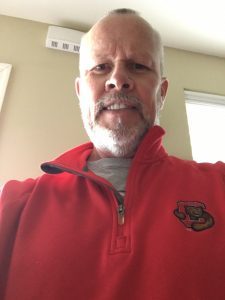 Joe may have regained his voice, but his thyroid nodule was still growing. Noticing this, Glenn referred Joe to Gregory Randolph, MD, division chief of Thyroid and Parathyroid Endocrine Surgery at Mass. Eye and Ear. He was scheduled for an appointment the very next morning.

Dr. Randolph examined Joe, ran through reports and arranged for him to have another CAT scan on his throat. “Dr. Randolph told me that the thyroid nodule had to come out due to its size.”

A month later, Joe had his thyroid removed. His nerve was preserved and his voice remains at the level that Glenn had achieved through therapy.

“They gave me my life back.”

“The minds and treatment in Boston are brilliant,” Joe said. “The whole experience was made very pleasant; everyone I came in contact with could tell something was wrong and I watched as they worked hard to diagnose and treat it. They gave me my life back.”

Joe is doing well today, but his health scare made him realize that nothing should be taken for granted.

“I’m 60 years old and this experience was really eye-opening,” he said. “My family and I are so grateful for what was done for us.”

1 thought on “Making His Voice Heard”