New research led by Kristina Simonyan, MD, PhD, Dr med, director of Laryngology Research at Massachusetts Eye and Ear, looks at whether a medication which mimics the effects of alcohol may reduce symptoms of laryngeal dystonia, a vocal condition that can severely impact a person’s ability to speak.

Imagine being in the prime of your life and suddenly losing your ability to speak in clear sentences. That scenario can play out for people with laryngeal dystonia, also known as spasmodic dysphonia, a neurological disorder that affects the vocal muscles in the larynx, and often strikes with little warning. 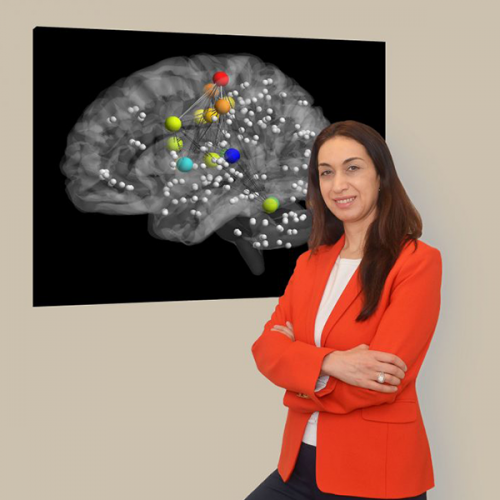 People with laryngeal dystonia may experience symptoms such as tight, strained, breathy or breaking voice when speaking. Typically, air from the lungs gets pushed between muscles in the larynx called the vocal folds and vocal cords to get them to vibrate, causing the sound of voice. However in laryngeal dystonia, the vocal fold muscles spasm involuntarily, interfering with the ability to produce a voice.

There are currently no diagnostic tests for laryngeal dystonia, and on average it takes patients up to five years to get the proper diagnosis, according to previous studies. Once diagnosed, treatment options are limited, including Botox injections to the vocal cord to help facilitate proper movements, which offers varying effects and some patients describe the procedure as painful. Many patients with the condition report being socially isolated.

A unique ongoing clinical trial at Mass. Eye and Ear is testing a new treatment in the form of a medication that mimics the effects of alcohol, which patients with this disorder have reported for years might ease their voice symptoms, STAT reports.

Dr. Simonyan has devoted much of her career to identifying causes and treatments for neurological disorders that cause these involuntary muscle spasms, a class of conditions called focal dystonias. In her new study, which is currently recruiting participants, her team is testing the use of sodium oxybate, a potential new oral medication for the treatment of spasmodic dysphonia and voice tremor that mimics some of alcohol’s effects.

That doesn’t mean doctors will start prescribing vodka to these patients based on these early results, with Dr. Simonyan noting that far more research is needed, including the ongoing placebo-controlled randomized controlled trial.

“I cannot envision a laryngologist prescribing alcohol,” Dr. Simonyan joked in an interview with STAT. She pointed out that she saw alcohol responsiveness as a test for people with laryngeal dystonia to determine that the subset of patients whose voices improved with vodka might be good candidates for other treatments, such as a dose of the medication.

Anecdotal reporters of alcohol’s effectiveness at improving vocal symptoms are a far cry from a peer-reviewed research study, so Dr. Simonyan and her team have performed research for the past 15 years to address this question among the disease community. This included a survey of more than 500 people with laryngeal dystonia with above half saying their symptoms improved after a drink. They then moved to an open label study, which meant participants and researchers knew whether they were getting the medication, which found significant reductions in voice symptoms in 37 out of 45 study participants. Dr. Simonyan warns far more research needs to be done, including the randomized controlled trial, which is ongoing.

Currently, the study is in its next phase as a randomized controlled trial, which is considered the gold standard of clinical research. In this study, participants drink two shots of vodka, then are given either sodium oxybate or a placebo on alternate days over a three-day period. The study also includes an MRI scan of the brain and a blood draw for genetic testing to look for other factors that might predict the disease and treatment responsiveness.

Read the full story, “The vodka trial: In search of a treatment for vocal disorders, a researcher puts patient anecdotes to the test” in STAT.

More information about the laryngeal dystonia trial can be found at ClinicalTrials.gov.