Not Missing a Moment

Deborah Hoberman spent years thinking the symptoms she was experiencing were a normal part of aging. She learned her assumptions were wrong after receiving care for hyperparathyroidism from Mass. Eye and Ear thyroid surgeon Gregory W. Randolph, MD.

Taking care of her grandchildren is one of Deborah Hoberman’s greatest joys. But for years her ability to keep up with them was hindered as she experienced symptoms she chalked up to normal aging.

“I had joint pain, hair loss, fatigue and blurred vision,” Deborah, a retired occupational health nurse-specialist from Nashua, New Hampshire, told Focus. “These symptoms were slowing me down, but I just thought that they were typical consequences of aging.”

It wasn’t until an unusually difficult bout with kidney stones that Deborah realized there was more happening. With a past history of kidney stones, she knew this time there was something different; something unlike her previous cases.

Despite receiving care, taking the proper medications and maintaining a strict diet, every few months more and more stones presented.

“My doctor kept telling me that once you have a kidney stone, you’ll have more,” Deborah mentioned. “But this time, I just knew something else was wrong.” 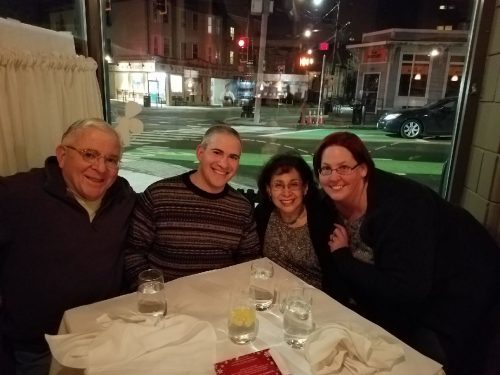 Deborah Hoberman (second from right) with her family.

After conducting some research, Deborah discovered that kidney stones were a sign of hyperparathyroidism, a condition that overproduces parathyroid hormones due to one or more overactive parathyroid glands.

She immediately sought the opinion of an endocrinologist, who confirmed her suspicion. Based on her diagnosis of hyperparathyroidism, he recommended surgery—and that she come to Massachusetts Eye and Ear.

“I asked him why I needed to go all the way to Boston for my surgery,” Deborah said. “He told me because that is where it would be done right.”

This wasn’t Deborah’s first experience with Mass. Eye and Ear. When her oldest son was nine years old, he was treated for retinopathy of prematurity, a potentially blinding disease caused by abnormal development of retinal blood vessels. Mass. Eye and Ear was able to save his vision, so she trusted she would be in the right hands, too.

Within weeks, Deborah had her first appointment with Dr. Gregory Randolph, chief of the Thyroid and Parathyroid Endocrine Surgery Division at Mass. Eye and Ear. She was impressed by how present he was with her, that she had his full attention.

“Everyone at Mass. Eye and Ear is so kind, patient and accommodating,” Deborah said. “Since day one, I’ve always felt confident in them. Especially in Dr. Randolph, who is gentle, thorough and organized. I knew that if he was that way during a clinic visit, then that is how he would operate, too.”

Getting back up to speed 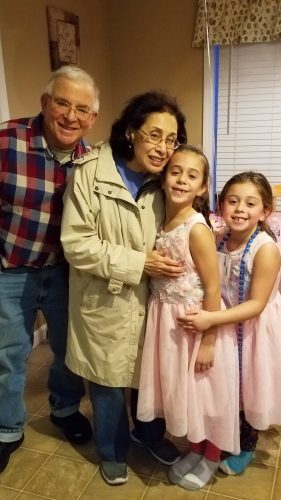 Deborah Hoberman with her husband Barry and their grandchildren.

Weeks after her visit, Deborah underwent surgery to remove her parathyroid glands (parathyroidectomy), and since then, she has only continued to feel better.

“So many things changed after surgery,” Deborah said. “My joint pain and hair loss stopped, my vision improved, and I got my energy back. I realized I was gradually experiencing, to paraphrase author Cimie J. Davis, a physical ‘incredible lightness of being.’ Physical complaints that I begrudgingly attributed to aging, improved dramatically or disappeared altogether.”

Hyperparathyroidism is a disorder that can go undetected because the symptoms are widespread and vary among patients. Deborah hopes that more people and clinicians consider hyperparathyroidism rather than have someone assume their symptoms are solely related to aging or primary care physicians prescribe medication.

Before surgery, Deborah was struggling to keep up with her young, energetic granddaughters; who she spends lots of time with and helps care for. Now, four months after her surgery, she is back up to speed and not missing a moment with them. She has also rediscovered the joy in walking, taking aerobics classes and exploring Boston.

“To Dr. Randolph, whose expertise and skills improved not only my health but my quality of life, I offer my heartfelt gratitude,” Deborah added.