Retinitis pigmentosa is a group of blinding eye diseases caused by more than 150 different gene mutations, making effective therapies difficult to develop. A new treatment created by scientists at Massachusetts Eye and Ear aims to provide broad-spectrum therapy, regardless of genetic cause, with promising early results in animals.

Scientists are working hard to find a cure for retinitis pigmentosa—a group of rare eye diseases that leads to permanent vision loss. Many treatments in development aim to target one of the 150 or more genetic mutations linked to this disease. But now, a novel treatment developed by scientists at Mass. Eye and Ear may one day help preserve or restore vision in patients with retinitis pigmentosa, regardless of their specific genetics.

Retinitis pigmentosa, which is part of a class of conditions called inherited retinal degenerations, affects approximately 1.5 million individuals worldwide, or 1 in 4,000 people. The condition causes photoreceptor cells in the eye’s retina to degenerate, leading to severe and permanent vision loss. In people with normal vision, the eye’s retina acts as a camera, where photoreceptor cells capture light and turn it into a brain signal to enable sight.

Since so many different genetic mutations are linked to retinitis pigmentosa, people experience varying degrees of symptoms, at different ages of onset, which makes diagnosing the condition difficult. In fact, some studies suggest that up to 40 percent of patients with retinitis pigmentosa cannot get a genetic diagnosis. That prompted lead researcher Neena B. Haider, PhD, an associate scientist at Mass. Eye and Ear, and her team to try to develop a “broad-spectrum” treatment approach that would be effective for anyone with retinitis pigmentosa regardless of the genetic cause. 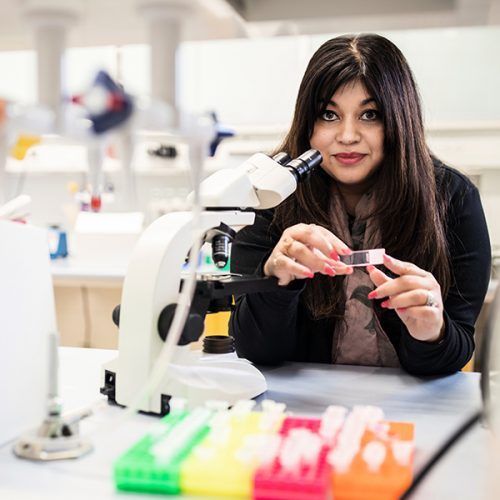 The new treatment starts with a nuclear hormone receptor gene called Nr2e3. In 2000, Dr. Haider made the first discovery that Nr2e3 was associated with several forms of inherited retinal disease. More recently, in mouse models, Dr. Haider’s lab showed that nuclear hormone receptors such as Nr2e3 (and Nr1d1) can rescue retinal degeneration. Her team’s studies have also found that Nr2e3 helps to maintain the eye’s normal retinal function and health. Given these beneficial associations, Dr. Haider and her colleagues wanted to see if providing Nr2e3 to other types of mouse models with retinitis pigmentosa might slow retinal degeneration and improve retinal health.

Mass. Eye and Ear researchers led by Dr. Haider developed a treatment that consists of delivering Nr2e3 to target cells in the retina using an adeno-associated viral (AAV) vector. Made from a harmless, inactivated virus, AAVs are delivery vehicles that carry genetic material to a cell. Dr. Haider’s team has previously published delivery and rescue of retinal degeneration with multiple AAV delivery vectors, nanoparticles, and even just DNA. Thus, the gene therapy product can be effective regardless of what vehicle is used to deliver it, according to Dr. Haider.

In the new study, published March 2 in Nature Gene Therapy, Dr. Haider’s group tested the novel treatment in five mouse models that have different forms of retinitis pigmentosa. Specifically, the mice had genetic forms of the disease caused by mutations in: Pde6B (rd1), Rhodopsin (Rho-/- and RhoP23H), cep290 (rd16), and Nr2e3 (rd7).

Each mouse model showed improvements when given the therapy at birth prior to disease onset. Remarkably, and relevant to patients currently suffering from retinitis pigmentosa, improvement was also observed when therapy was given after disease onset. Dr. Haider added that the therapy reduced retinal degeneration in these mice by allowing the retina to resume function and health to a more normal, stable state. Partial rescue of photoreceptor cells occurred in all five mouse models.

“There is no single treatment or diagnostic test for retinitis pigmentosa because there are more than 150 genes that cause it. Therefore, new therapeutic approaches are essential to preserve and restore vision,” explained Dr. Haider. “These promising findings in mice are unprecedented and give us great hope as we begin FDA studies that will lead to and guide clinical trials.”

Currently, there are several other gene therapies for retinitis pigmentosa in development. Similarly, many of these treatments use AAVs to target a particular gene: An example of a single-gene replacement therapy for an inherited retinal disease caused by mutations in the gene, RPE65, is Luxturna. In 2018, Mass. Eye and Ear was the first to perform Luxturna replacement therapy in the U.S. in a 13-year-old boy experiencing vision loss.

This new therapy can use AAV but avoid the need to target a specific gene, opening up treatment possibilities to more forms of the disease, Dr. Haider points out.

“In the landscape of gene therapy, this is transformative and a game changer in how we design gene therapies that can potentially have a profound impact on human diseases,” said Dr. Haider.

Dr. Haider’s research has been funded by the National Institutes of Health consistently and without interruption since the project’s start, nearly 20 years ago.

In 2017, Dr. Haider and her team partnered with a pharmaceutical company named Ocugen to license her research in order to develop and commercialize this treatment, called OCU400, as an ophthalmology medication.

Last September, the U.S. Food and Drug Administration granted OCU400 an Orphan Drug Designation for retinal disease associated with the CEP290 gene, in addition to NR3E3 mutation-associated retinal degenerations. This designation provides incentives for companies to treat rare diseases affecting fewer than 200,000 patients in the U.S., such as tax credits for research costs and other marketing and trial exclusivity.

The team hopes to begin clinical trials with this treatment by 2021 with Mass. Eye and Ear as a trial site.