Running for Her Brother’s Cure

Twenty-one-year-old Kristen Miquel shares why she is running the 125th Boston Marathon for her younger brother Quentin who has a rare retinal disease. 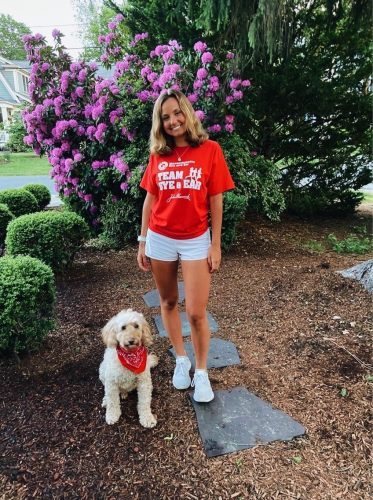 “If my brother Quentin can endure six eye surgeries in three months, I can run 26.2 miles for a cure.”

This is how Kristen Miquel explains how she came to join Team Eye and Ear, the marathon team at Mass Eye and Ear. Kristen is training to run the Boston Marathon this October to honor her younger brother Quentin, and to raise funding for research to help others like him.

This past winter, Quentin suffered a sudden loss of vision in his right eye from a retinal tear. As a result, he received six surgeries at Mass Eye and Ear from his longtime surgeon, Shizuo Mukai, MD, to save his vision. Quentin was a senior in high school at the time, being actively recruited for swimming by Division 1 colleges.

“I hope to raise awareness and funds to find a cure to prevent any further risk of vision loss for Quentin and others affected by retinal conditions,” said Kristen.

Competing for a cure

Quentin, featured in the online Sense-ation! Gala at Mass Eye and Ear last year, is no stranger to the hospital. Kristen shared, “As a lifelong patient of Mass Eye and Ear, Quentin has always received top notch care and been treated with the utmost respect by Dr. Mukai and his entire team.”

At age three, Quentin was diagnosed with Juvenile Retinoschisis, a rare condition in both eyes that can cause vision loss due to complications from the splitting of the retinal lining. When Quentin was four years old, he became the first child to undergo a surgery to repair macular holes in the eye. Macular holes are small breaks in a tissue in the middle of the retina responsible for central vision. The condition and procedure are most common in people over 60, yet Dr. Mukai and his team successfully performed it on young Quentin, and have been working with him since. There is still no cure for his condition. 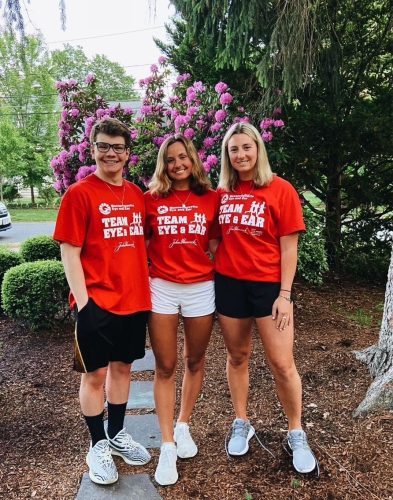 When asked why she chose to run her first marathon in 2021, Kristen told Focus that after Quentin’s surgeries this past year, she wanted to raise money for the research that has played such an important role in maintaining her brother’s eyesight. So far, Kristen has raised more than $12,000 for this research.

“It’s really heartwarming to know that there are so many generous people out there who want to support me and Mass Eye and Ear,” she said.

Runs in the family

For the Miquels, the Boston Marathon has become a family tradition. Kristen and Quentin’s father, Bruno, ran the marathon in 2013 and 2014 with Team Eye and Ear. He has enjoyed sharing his training advice with Kristen. Having her family’s support has been a very important part of Kristen’s journey. She shared that out of everything, she is most excited to see her friends and family on the course on October 11.

“Quentin’s recovery has been amazing and he was able to travel to France to train with a swim team there,” said Kristen. “He has been sending me motivational messages and I’m so happy he can come home in October to cheer me on!”

Kristen, a senior in college and the youngest member of Team Eye and Ear, said she has been able to juggle schoolwork and searching for a job while training for her first marathon.

“I think I’ve found a good balance, focusing on holding myself accountable and staying healthy! I’ve been so fortunate to connect with other members of Team Eye and Ear and it’s been inspiring to hear their stories and motivations for running the marathon,” said Kristen.

Kristen hopes to inspire others considering running with Team Eye and Ear in the future. “I was always a swimmer growing up and never thought I could run a marathon. It’s easier than I imagined to follow the training program, and Coach Fred [Treseler] and the rest of the team have been invaluable during my training. It’s a great opportunity to motivate yourself and get out of your comfort zone,” said Kristen. “Especially when you know you are raising funds and awareness for such an incredible cause!” 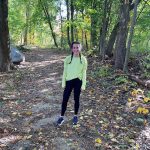 Inspired to Run by a Lifetime of Care 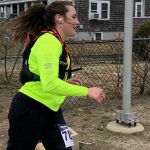