It’s an eye injury that no one wants to imagine.

On a bright summer day, 17-year-old Nicholas Patterson was outside with his family while a fence was being built in the garden at their home in Western Massachusetts. As the person doing the work hammered away, a string carrying a nail flew back toward Nicholas’ face, launching a nail into his eye. Immediately in agony, Nicholas fell to the ground, felt around his eye and pulled the nail out.

“It was very scary,” she said. “He instinctively pulled the nail out, and there was a large black hole in his eye.”

An ambulance ride and a trip to the local general hospital later, Nicholas was on his way to the Mass. Eye and Ear Emergency Department in Boston. Referring doctors felt that his injury would be in the most experienced hands there.

He met with Elizabeth Rossin, MD, PhD, director of Mass. Eye and Ear’s Eye Trauma Service. Due to the size of the nail, which was quite wide, and the depth of the injury (to the back wall of the eye), Dr. Rossin and her team took Nicholas into surgery right away.

The surgery that day was successful. “Dr. Rossin did a perfect job of saving his eye,” Galina said. Given that the nail had traveled far back into Nicholas’ eye, Dr. Rossin asked that he come back to see a retina specialist, Leo Kim, MD, PhD, the following week.

At the follow-up visit, Dr. Kim saw that Nicholas’ retina had detached in the injured eye – a common complication with traumatic eye injuries. Dr. Kim performed a second successful surgery to re-attach the retina, even though the recovery was tough on the rising high school senior.

“He had to lie face down for almost a month, which was hard for him,” Galina said. “His senior year had just begun, and he missed almost two months of school.”

As part of his recovery, Nicholas came back to see Dr. Kim every few weeks to check his retina. At one appointment, Dr. Kim noticed some scar tissue at the back of his eye, as well as a cataract that had developed (another common complication of eye trauma). Nicholas was scheduled for a third surgery to clear up these remaining issues. 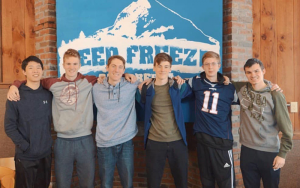 After a horrific eye injury, Nicholas (second from right) was lucky to have his vision saved. He’s now looking forward to finishing up his senior year and starting college.

One last surgery on the road to recovery

After a successful procedure with Dr. Kim and his colleague, Ryan Vasan, MD, Nicholas had his fourth and final surgery to get his lens replaced. He was then well on his way to a full recovery. His family can hardly believe that, after such a horrific injury, Nicholas’ vision in the injured eye is 20/40, and he can see 20/20 with glasses.

He’s now looking forward to finishing up his senior year and starting college in the fall.

“I can’t believe how well he is doing today, given all that happened,” said Galina. “I remember the moment we learned that the nail had missed his fovea (which accounts for central vision) by 3mm, and that it had missed his optic nerve by 5mm. We’re so lucky. But also, Nicholas’ doctors saved his eye, his vision — and his life. Because if you lose an eye, it takes a toll emotionally.”