Seeing the Best in Any Situation

Phuong Nguyen was so inspired by the care she received at Massachusetts Eye and Ear that she decided to give back. Now, she serves as a Vietnamese interpreter for the hospital.

Every day, Phuong Nguyen demonstrates strength and commitment to her work with the Interpreter Services team at Mass Eye and Ear. She lives with a degenerative eye disease and uses her experience to help and empathize with those in a similar position.

“I once met a patient who was astonished by the fact that I am legally blind and yet here I am interpreting for other blind patients,” she told Focus.

A native of Hanoi, Vietnam, one of Phuong’s earliest memories as a child is that of an attack on the city during the Vietnam War, which resulted in hundreds of casualties. From that devastating moment, Phuong developed a compassion towards others, something that is reflected in her service to patients at Mass. Eye and Ear. 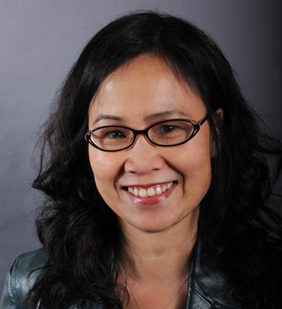 During the time when Phuong was in school, Vietnamese students were allowed to be educated in Russia. Phuong’s interest in languages and other cultures led to her obtaining a degree in Russian Linguistics and Literature. But as history unfolded and Vietnam opened the doors to the west, many scholars opted to travel and explore other countries. She tapped into her connections from the university and traveled to Australia to become a visiting fellow for language and culture and in 2001, she came to Boston as a Fulbright Scholar at UMass Boston.

Challenges to eyesight in a new home

While in Boston, Phuong realized that her eyesight was quickly deteriorating, so she decided to seek out help from experts at Mass. Eye and Ear. She visited Dr. Eliot Berson, who has since passed away. Dr. Berson was one of the leading experts in inherited retinal diseases and the Founding Director of the Berman-Gund Laboratory for the Study of Retinal Degenerations at Mass. Eye and Ear.

In meeting with Dr. Berson, Phuong learned that she had a form of retinitis pigmentosa, a rare disease caused by genetic mutations that causes severe vision impairment and had no known cure.

At the time, Phuong was working on getting a doctorate degree in linguistics. Dr. Berson encouraged her to continue her studies despite her diagnosis. In a new phase in life, she learned to work with assistive materials in the classroom, such as screen readers, and used three different pairs of glasses: one for reading books, one for seeing distance, and one for using the computer. Eventually, she started losing her peripheral vision and the brightness from the sun made it challenging for her eyes to adjust. That’s when she realized she needed the assistance of a cane.

A new outlook on life

Phuong’s time as a patient at Mass. Eye and Ear completely changed her outlook on life. She decided to become an interpreter at the hospital to help the patients who, like her, face new challenges from a difficult prognosis and need support. There is a Vietnamese saying that goes, “you can be rich with your eyes, but you can be poor with your hands,” she said. “Which means make the most of what life throws your way.”

“When I come into work, I feel like I’m coming home,” Phuong commented. “People greet me in different languages and I feel like I am part of this family.”

Phuong now travels back and forth between Vietnam and Boston, helping children who have been affected by genetic eye diseases caused by “Agent Orange,” a toxic chemical substance that was weaponized during the Vietnam War. Unfortunately, some of the children of those who survived the war were born with severe genetic abnormalities. Besides working as an ambassador for her culture, sharing the beautiful things about her country, Phuong collects used canes to bring to those affected by the war’s aftermath.

“Those who have been kind to me have made the biggest impact on my life,” said Phuong. “That is why I’m doing my part to give back.”