Setting Sights on Making a Splash

A young Mass. Eye and Ear patient swims competitively throughout her journey with a rare eye cancer

Meagan Hathaway has been swimming competitively since the age of nine. In high school, she spent hours perfecting her strokes, aiming to get faster in the pool with the goal of continuing at the college level. It seemed as though nothing was holding her back.

That is, until a year ago.

Meagan went to her pediatrician for a routine check-up. During this visit, her doctor became concerned about a brown spot on her iris — the circular part of the eye where color is defined — which had been present for many years.

“They thought the spot had been there since I was five years old,” Meagan, now 18, said. “I always had perfect vision and was never in any pain.”

Meagan’s doctor referred her to Mary E. Aronow, MD, an ophthalmologist at Massachusetts Eye and Ear specializing in eye cancers.

Dr. Aronow performed a biopsy in the operating room, which confirmed that Meagan had an iris melanoma.

“Iris melanoma is one form of ocular melanoma, a condition that affects about five people per million,” Dr. Aronow explained. “We were very thorough with our diagnosis, because it’s so rare and typically found in middle-aged to older adults.” Iris melanoma is not genetic or linked to sun exposure.

Upon learning of the diagnosis, Meagan’s mother, Trish said, “I was shocked, but also reassured, because Dr. Aronow laid out everything for us.”

Mass. Eye and Ear is home to the Ocular Melanoma Center, one of the largest services of its kind. Eye cancer specialists, including Dr. Aronow, work hand-in-hand with the Department of Radiation Oncology at Massachusetts General Hospital to deliver proton beam therapy, which focuses a beam of radiation directly on the tumor.

Dr. Aronow referred Meagan to the Francis H. Burr Proton Beam Therapy Center where she underwent radiation therapy on her eye for five consecutive days. “Breaking it up into five treatments is less toxic and easier for the patient,” Dr. Aronow said. “We’re fortunate that we’re one of the few centers to have proton beam therapy and incredible technology to provide this treatment.”

During this period, Meagan continued to attend swim practice early in the morning, receive her treatment, go to school and then head back to swim practice in the evening. She had to wear a protective face mask while in the pool, but that didn’t stop her.

“Swimming is where I had made some of my closest friends,” said Meagan. “I wanted to keep swimming, because seeing them was honestly the best part of my day, and their support really brought me up.” 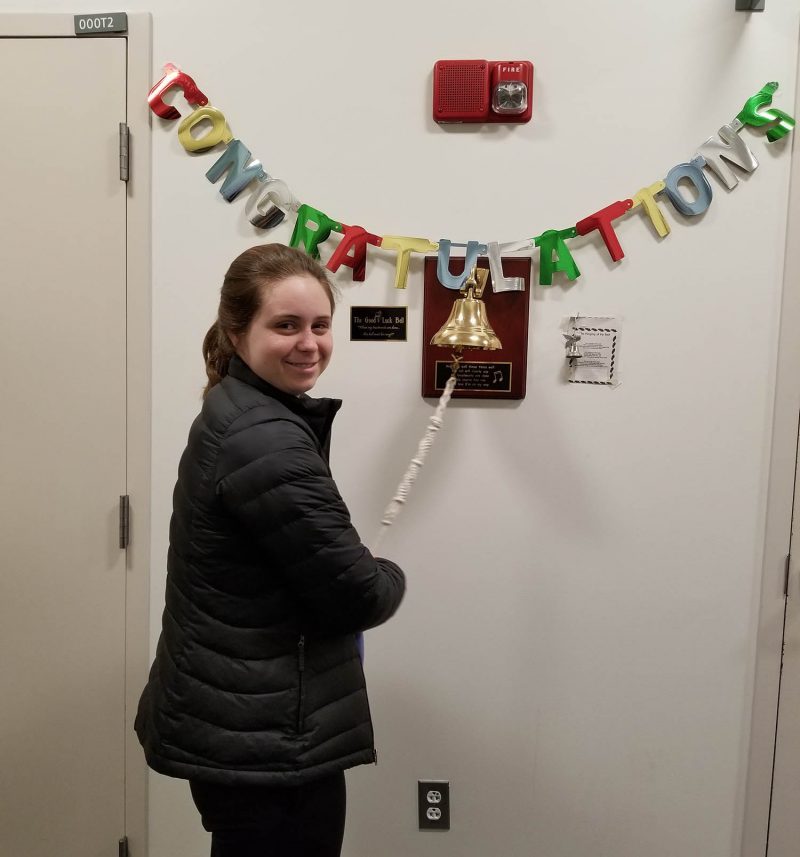 Meagan was diagnosed with a rare eye cancer during her senior year of high school. Ringing the bell on her last day of radiation treatment soon marked the beginning of her return to good health.

Diving back into normalcy

“Meagan wanted to get back in the pool since the beginning,” said Dr. Aronow. Her swimming was never impacted. And once she completed cancer treatment, Meagan attended her senior prom and graduated high school.

Following Meagan’s radiation treatment in March 2018, she saw Dr. Aronow a few more times in the spring. In July, Dr. Aronow noted that she had seen some early regression of the tumor, and Meagan will have another ultrasound to observe her progress.

“Overall, our experience was excellent; we are so lucky to be close to such an exceptional hospital,” said Trish. “For families going through something similar, my advice is to take it day-by-day and stay in close communication with your doctor.”

Now, Meagan is a freshman at Bucknell University and a member of the women’s swim team. So for the time being, she’s focused on hitting the books and spending time in the pool.