The Show Must Go On

Street performer Vivian Luo’s unexpected encounter with a rare eye infection began with a new pair of contact lenses. Her treatment at Mass Eye and Ear helped keep her at center stage.

Vivian Luo’s violin has taken her from the chamber halls of New York City to the streets of Boston, attracting the adulation of many admirers, even Grammy award-winning artist Lil Nas X. However, a sudden bout of eye pain and subsequent surprising diagnosis threatened to derail her performance plans.

A visit to Mass Eye and Ear revealed that she had acanthamoeba keratitis, a rare and serious eye infection that can lead to blindness if left untreated.

“I was in the middle of planning upcoming performances and volunteering, and suddenly everything had to stop,” Vivian, a 30-year-old Malden resident, told Focus. “I absolutely had no idea an infection like this even existed.”

Vivian first picked up a violin when she was 8-years-old. Classically trained, she performed throughout school and eventually in Columbia University’s chamber orchestra. She kept up her playing as she began a career in finance in the Boston area.

One day she randomly decided to join a friend who was a street DJ for a duet, and instantly became hooked on street performing. She fell in love with the roar of the crowd and the feeling of everyone watching her perform. Soon enough, she would take her electric violin and amplifier around Boston on weekends, performing covers of pop 100 hits to enraptured crowds. Within a year, what she initially saw as a weekend hobby had become something much more.

“Some days, I just couldn’t wait to get out of work and perform,” she said. “I loved my job and my colleagues, but I just loved something else more.”

Eventually, Vivian left her six-figure salary behind to pursue her passion full-time. Day in and day out she would perform at Boston’s most bustling locations, like tourist-packed Faneuil Hall and T-stops crowded with commuters.

But her music career took a sudden turn last March when she began experiencing eye pain shortly after trying a new pair of contact lenses. Vivian assumed it was a corneal abrasion, an eye scratch caused by her new lenses, and stopped wearing them. But, a few days later, she noticed her symptoms worsen when out for a hike. Her eye felt like it had something stuck in it, and it would water so much that her glasses fogged up.

She went back to her optometrist, who told her, “You should go to Mass Eye and Ear.”

Acanthamoeba keratitis is an infection caused by a microscopic ameba that enters the cornea, the eye’s transparent outer layer. Symptoms include pain, excessive tearing, redness, light sensitivity and can progress to vision loss if untreated.

The most common way a person becomes infected is through contact lens wear. Other ways include exposure to contaminated water, such as through lens wear or swimming, or in rarer cases, through tap water. People can reduce their risk by regularly changing their contact lens cases, not leaving lenses in overnight or wearing them when bathing or swimming, and taking lens holidays – throwing on a pair of eyeglasses at regular intervals.

Vivian, like most people, had never heard of acanthamoeba keratitis until her diagnosis was made by Mass Eye and Ear’s James Chodosh, MD, associate director of the Cornea and Refractive Surgery Service.

“Acanthamoeba keratitis is a rare but particularly severe infection,” said Dr. Chodosh. “It can be a life-changing experience for patients.”

Acanthamoeba keratitis is not as well-studied as more common, yet less severe, eye conditions according to Dr. Chodosh, and for unknown reasons, it’s become much harder to treat over the past decade.

“Vivian’s infection was especially surprising. Although we caught it very early, and typically that would mean treatment success, her infection quickly worsened despite state-of-the-art treatment,” he said.

Vivian was prescribed eye drops every two hours and oral medications. The medication caused stomach aches, and her pain and light sensitivity from the infection took their toll.

“I felt like I wasn’t able to live normally,” she said. “The things I took for granted, like going outside for a walk, felt so hard to do.”

The road back to performing

Vivian continued to see Dr. Chodosh every other week to monitor the infection and update treatments as needed.

“Dr. Chodosh was fantastic,” she said. “He not only tried to make sure my eye was doing okay, but he made sure that I – myself as a human being — was okay. I found this really refreshing because not all doctors do that.” 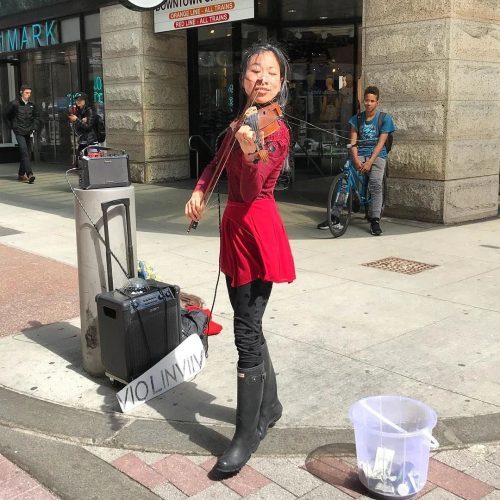 Playing outside of a T station. Credit: https://violinviiv.com/

She wanted to start performing again, however, the light sensitivity made it challenging. A pair of ski goggles she found in her closet helped her improvise. She wore them to block sunlight and protect her eyes from debris, which would lead to “lots of funky questions” from audience members. Nearby food truck vendors also helped out, storing her eye drops in their refrigerators on especially sweltering days.

Vivian’s pain has subsided and her light sensitivity has improved, and it appears her infection may finally be cured. However, she knows the course of the infection is unpredictable. She will continue to see Dr. Chodosh, and is grateful that her journey took her to Mass Eye and Ear.

“It’s been really incredible and a huge blessing to be a patient here,” she said. “Every time you sit down with someone, a nurse, fellow, or doctor, everyone really has your best interest in mind. Even in the cafeteria, they always ask me, ‘where is my violin?’”

Dr. Chodosh has been inspired by Vivian, and considers it a big service that she has shared her story, such as with WBZ and The Boston Globe, to let people see they can triumph over life’s obstacles.

“Vivian retained her humanity and continued to play her violin and do her work despite being in pain and having extreme light sensitivity,” he said. “I’m continually humbled by her resilience and her spirit – you can hear it in her music. It’s been an honor and privilege to take care of her through a difficult time.”