What’s Behind Her SMILE?

An alternative to the Lasik procedure — SMILE — is becoming more popular. A Mass. Eye and Ear patient shares what it’s like to have the latest technique in laser vision correction.

Two months ago, Adria Halasz couldn’t go anywhere without her contacts or glasses. “I was so nearsighted and dependent on visual aids,” she said. “I had a constant fear of not being able to see.”

In search of a permanent fix, she started looking into laser vision correction surgery. 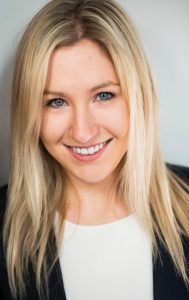 In search of freedom from glasses and contacts, Adria decided she was ready to explore laser vision correction. She and her doctor decided that a new technique, SMILE, was the right fit.

Like many considering laser vision correction, Adria was first interested in Lasik — the most common type of refractive surgery.

But then she heard about a new procedure, known as SMILE. The surgery, sometimes called “flapless Lasik,” corrects nearsightedness and is widely considered less invasive and gentler than Lasik.

“A coworker in our London office had it done, and she was raving about the results,” said Adria, who works for a global company in New York. “Since the incision is smaller, there seemed to be fewer risks compared to Lasik.”

FDA-approved in September 2016, SMILE is still pretty new, and not many doctors offer it in the United States. “I was prepared to go all the way to London, when I found an article featuring Dr. Kathryn Hatch at Mass. Eye and Ear, Waltham,” Adria recalls. The Waltham location is the only facility in New England offering the SMILE procedure.

She chose Dr. Hatch not only for her convenient location, but also because of her stellar reputation.

“Dr. Hatch had excellent patient reviews, and Mass. Eye and Ear is one of the best specialty hospitals in the nation,” Adria says. After her consultation appointment, it was confirmed that Adria would be a candidate for surgery.

Adria had no doubts that the surgery would be a success. She trusted Dr. Hatch and was well-informed of the benefits, possible side effects and recovery time of SMILE.

But she did have some anxiety about the experience. Would it hurt? Would she be able to keep her eyes still during the procedure?

“It turned out to be super easy,” she said. “They gave me some medicine to help me relax, and then they put numbing drops in my eyes so I couldn’t feel anything during surgery. It was completely painless.”

From start to finish, the whole procedure only took about 20 minutes for both eyes.

Her recovery was also quick. For the first week, Adria felt like she had something in her eyes. “I was glad I took some off of work because my eyes felt dry, and I had a hard time reading for several days,” she said. But after two weeks, she was back to her normal self.

Seeing Better Than Ever

Adria recently started graduate school, and she was thrilled to leave her glasses and contacts behind.

“Everything went exactly how I had hoped. In fact, now I can see even better than I did with my contacts.”

Although SMILE is quickly gaining popularity in the United States, it is important to note that not everyone is a good candidate for the procedure. If your doctor doesn’t think SMILE is right for you, you may be eligible for other types of corrective surgery, such as Lasik or PRK. To schedule an evaluation at Mass. Eye and Ear, call 844-71-SIGHT or request an appointment online.

6 thoughts on “What’s Behind Her SMILE?”