David Owen, a reporter for The New Yorker, spent time at Mass. Eye and Ear in 2018 interviewing hearing scientists, clinicians and patients for his new book, Volume Control: Hearing in a Deafening World.

An estimated 37 million Americans have a form of hearing loss, and as author David Owen notes in his new book, Volume Control: Hearing in a Deafening World, many don’t seek the treatment they need due to the costs of hearing aids and the stigma associated with wearing them.

“Hearing problems are often aggravated by the human tendency to do nothing and hope for the best, usually while pretending that everything is fine,” he wrote.

In an effort to demystify the issues affecting hearing and inform people with hearing loss about the latest science and treatments, Owen, a writer at The New Yorker who suffers from ringing in the ears known as tinnitus, visited Mass. Eye and Ear in 2018 and spent time with faculty from the Department of Otolaryngology–Head and Neck Surgery and its Eaton-Peabody Laboratories (EPL).

Here, he sought to learn everything about hearing from the basic biology of the human ear to the hidden sound damage caused to Americans both in the workforce and at home. 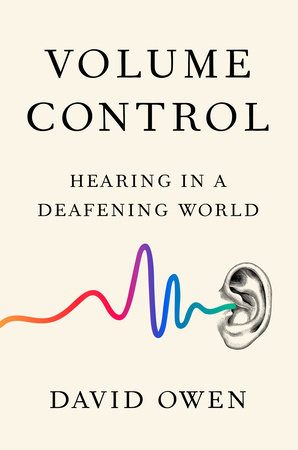 While available therapies such as hearing aids and cochlear implants help those with hearing loss, many scientists, including those at Mass. Eye and Ear, share the goal of restoring one’s natural ability to hear. Promising research, including some seminal discoveries that were found by Mass. Eye and Ear hearing scientists, may go a long way toward reaching this objective.

Owen described meeting with Dr. Liberman and Dr. Kujawa, and learning about their discovery that hearing damage caused by noise occurs initially in the synaptic connections between them. Called cochlear synaptopathy or, “hidden hearing loss,” this condition has been linked to difficulty understanding speech in noisy environments and could be prevented or reversed with an improved diagnosis.

Owen writes that this research suggests, “among many other things, that American noise-related workplace protections are wholly inadequate.”

Owen’s reporting also notes that scientists in the EPL were the first to discover that stem cells found in the inner ear could be converted into sensory cells needed for hearing. They were able to restore hearing in mammals using this technique. Such promising research may lead to better diagnostic measures and treatments for hearing problems.

Prevention and getting help early

Many people are not getting the hearing help they need, according to Owen, due to hearing aids being considered a sign of aging and people’s propensity to ignore problems that they hope will improve. However, he writes, there are now more options than ever.

For some people who refuse to accept the conventional hearing aid, there are newer technologies that may be of interest. Owen writes about meeting with Dr. Franck and looking at some of the latest classes of earphones and hearing technology developed by major companies. Smartphone applications used for measuring sound and hearing help are also becoming increasingly more available.

Dr. Franck often points out to people considering these devices that, “hearing aids don’t mean that you’re old, and wearing headphones designed to help you hear does not make you rude”. Hearing devices, including hearing aids, cochlear implants, hearables and others are remarkable technologies to help keep you hearing well into the future, he said.

Prevention is crucial, first and foremost, and as Owen writes, he now wears earplugs frequently, including when he sees loud movies. Several experts interviewed note that earplugs are helpful for people who work in industries with loud noise exposure as well.

Get more information on Volume Control: Hearing in a Deafening World.