Radiofrequency ablation clinic is a joint program, launched by the Thyroid and Parathyroid Endocrine Surgery Division and Department of Radiology at Mass Eye and Ear, that shrinks small thyroid growths without surgery.

The procedure, recently introduced to Mass Eye and Ear, involves using focused heat from a probe to shrink the size of a thyroid growth. Radiofrequency ablation provides a more minimally-invasive option to removing the nodule and part of the thyroid gland with surgery. Primarily used for thyroid nodules, the technique also treats small cancer recurrences.

The new radiofrequency ablation program is co-led by Gregory W. Randolph, MD, director of the Thyroid and Parathyroid Endocrine Surgical Division, and Mary Beth Cunnane, MD, chief of Radiology and a specialist in head and neck ultrasound. Both experts perform the procedure together to ensure the best outcome and combine their knowledge in thyroid care and imaging, they told Focus.

“People with benign thyroid nodules and small tumors now have a new treatment option that avoids surgery in the operating room,” said Dr. Randolph. “With our surgical and radiology experience here at Mass Eye and Ear, we feel there is no better environment to provide this procedure.”

Thyroid nodules are abnormal growths or lumps that occur in the thyroid gland, which is located in the lower front of the neck, according to the American Thyroid Association. These nodules are extremely common, with some studies suggesting that more than 50 percent of the general population has them.

With thyroid nodules, an individual might notice a lump on his or her neck. In most cases, however, there are no symptoms. Once found, yearly monitoring of a nodule is recommended.

“Typically, we monitor these nodules with an ultrasound annually to observe the size and whether or not there is any growth,” Dr. Cunnane told Focus. “If a patient starts to feel a lump when swallowing, or experiences symptoms and discomfort, she or he would be referred to a thyroid surgeon who may offer radiofrequency ablation as an option.”

If cancer is suspected, which is less common, a biopsy is performed. During this procedure, a needle is inserted into the thyroid nodule, also guided by ultrasound, and cells are captured to be studied by a pathologist.

During radiofrequency ablation of a thyroid nodule, an ultrasound is used to obtain an image inside the thyroid and neck in order to guide the placement of an electric probe. The probe generates high-frequency radio waves, which create heat. The focused temperature ablates the tissue and reduces the nodule’s size. This is an outpatient procedure which is performed in a radiology suite. Recovery is minimal; usually there is some minor swelling, redness or bruising around the needle.

Before this technique was introduced, a thyroid nodule had to be removed through surgical incision in the OR under general anesthesia. This surgery, called a hemithyroidectomy, would involve removing half or part of the thyroid gland, and often requires supplemental hormone treatment afterwards. This method is well-studied and effective, but as with all surgeries, there are risks and a longer recovery may be required.

Radiofrequency ablation has been used in medical care for years, most commonly as a treatment for back pain and heart problems like atrial fibrillation. The procedure has been used extensively to treat thyroid nodules in Europe and Asia prior to its recent introduction into the U.S. in late 2019. Dr. Cunnane was trained on the procedure in Italy last year, and noted its similarities to an ultrasound-guided biopsy of the thyroid, which is a procedure commonly performed at Mass Eye and Ear by her and Dr. Randolph. Dr. Randolph and Dr. Cunnane are currently writing a global radiofrequency ablation consensus paper with a consortium of six surgical and endocrine organizations around the world.

Patients interested in the procedure can make an appointment directly with the Thyroid and Parathyroid clinic to determine their candidacy.

Gregory W. Randolph, MD is Division Chief of General Otolaryngology and Thyroid and Parathyroid Endocrine Surgery at Mass Eye and Ear. He sees patients at the Main Campus (243 Charles Street). 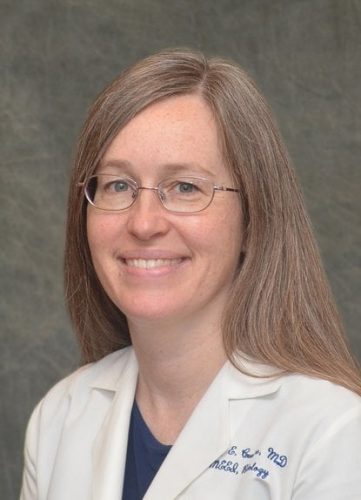 Mary Beth Cunnane, MD is the Chief of Radiology at Mass Eye and Ear. She sees patients at the Main Campus (243 Charles Street).

Mass. Eye and Ear is now offering virtual visits to patients in Massachusetts.

Help Mass. Eye and Ear carry out our mission and support our amazing physicians and caregivers as they care for our patients today and for years to come.

When is a Thyroid Tumor Considered Cancerous?

In 2016, an international panel of doctors issued a statement that some thyroid tumors were, in fact, not cancerous.

Surgeons at Mass. Eye and Ear offer minimally invasive thyroidectomy surgeries that result in no postoperative scars. The adverse effects of a neck scar, a de ...

Not Missing a Moment

Deborah Hoberman spent years thinking the symptoms she was experiencing were a normal part of aging. She learned her assumptions were wrong after receiving care ...