Jack was born with an eye condition known as retinitis pigmentosa associated with RPE65 gene mutations. Two months ago, he was treated with a newly FDA-approved gene therapy drug known as Luxturna — and the results are life-changing.

“Mom, that was the best day ever,” Jack Hogan said when he noticed he could see the whiteboard in his classroom for the very first time without his visual aid.

In March, a Mass. Eye and Ear team led by Jason Comander, M.D., Ph.D., Associate Director of the Inherited Retinal Disorders Service, made history by performing the first FDA-approved gene therapy administration for any inherited disease. Their patient, 13-year-old Jack, has had retinitis pigmentosa associated with RPE65 gene mutations since birth. This degenerative disorder has caused Jack to struggle to see at night and with his peripheral vision. Some patients with Jack’s condition go blind by their 20s or 30s.

Last week, just two months after surgery, Jack came back to Mass. Eye and Ear for some vision testing — and the results were remarkable.

Jack and his surgeon, Dr. Jason Comander, meet to discuss the improvements to Jack’s vision since his gene therapy surgery on March 20, 2018.

“It is truly amazing to see large improvements in Jack’s vision, which would have been impossible without this treatment,” said Dr. Comander.

“These results are representative of just how big a moment this is for gene therapy. It is helping our patients, and it is here to stay,” added Dr. Comander. 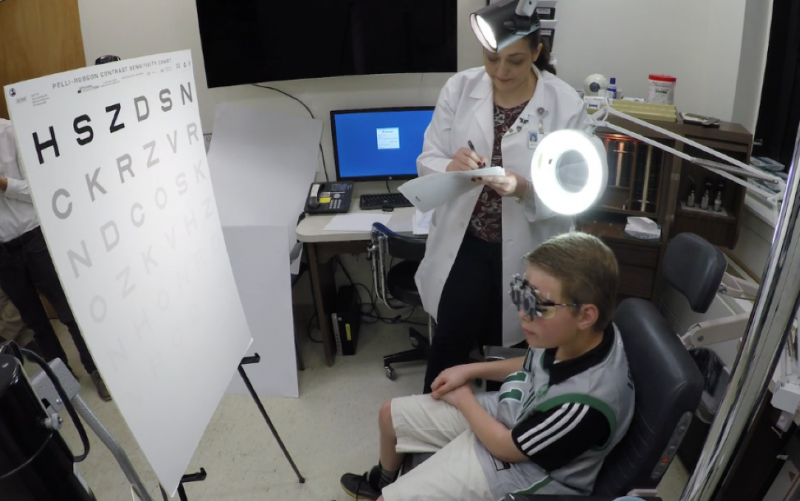 A Life More in Focus

The groundbreaking treatment, commercially known as “Luxturna,” has already made a significant impact on Jack’s daily life.

“He really is a different kid,” said Jack’s mother, Jeanette. “He’s doing his homework on his own. Before, he was always struggling, because he couldn’t see. A lot of the things that we take for granted he couldn’t do, and now he can, which is wonderful. That’s all we really wanted for him.”

In particular, Jack is seeing much better at night and in places with dim lighting — like movie theaters and restaurants. He can now play outside with friends after dark. “I’ve never ridden my bike at all at night, and now I can,” said Jack.

What’s Next for Jack?

Jack will be back at Mass. Eye and Ear for follow-up visits every few months to check in with Dr. Comander and his care team.

That said — Luxturna is designed as a one-time therapy. Our hope is that the treatment will last throughout Jack’s lifetime.

For more on Jack’s story, watch the video above (download transcript), which was filmed at his recent follow-up visit.